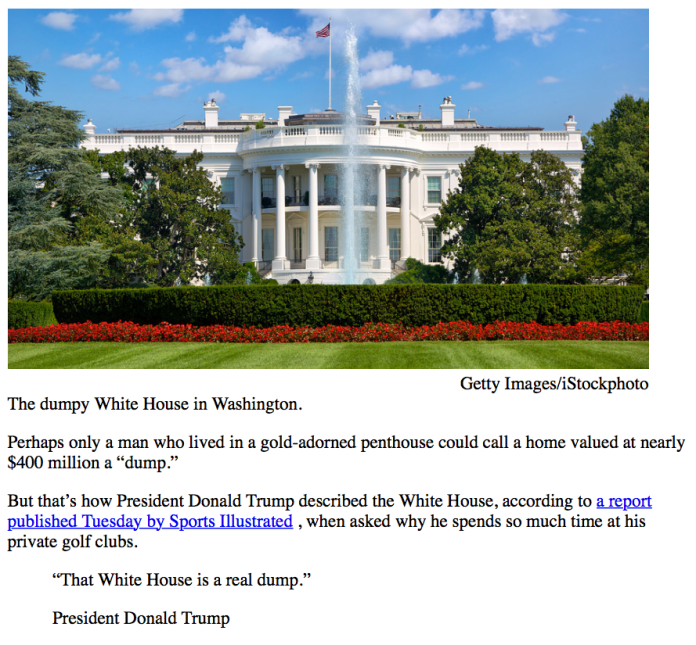 As accustomed to the frequent barrage of BS from the current administration as I’m becoming, I confess to being more than a little taken aback by #45’s critique on Tuesday of his current digs; “That White House is a real dump.” Over the past 196 days, #45 has said and done some doozies, but something about dissing The White House itself, a spectacular home which is paid for by our taxes, just boggles my mind. I picture him leaving his dirty socks all over the West Wing, littering the White House with greasy fast food wrapping, the way he’s been littering our country with trashy hate-filled speech and Twitter tweets. The comment kept coming to mind the past couple days, until it occurred to me to consider my own concept of “home”. And I realized with a start that MY home is my body – where I live, the physical manifestation of my being – and that in the past I have been treating MY White House as “a real dump” – every time I don’t take care of it. Every time I overindulge in food or decide to stay up too late or make myself jittery with too much coffee. Every time I blow off exercise and fritter away hours window-shoppping and doing stupid puzzles online. I’m offended at #45’s lack of respect for his home because I’ve been disrespecting my own home.

I’m actually grateful for the wake-up call. I can only hope that #45 will tune in and hear himself as clearly as I am hearing him now. Because where we live is NOT a dump, unless we make it so. You don’t have to be a billionaire to figure that one out!

3 thoughts on “My Undumpy White House”