One of my dad’s favorite sayings was “watch the feet”, because, after all, talk is cheap, whereas my mother’s favorite piece of advice was “keep marching!” Mom was more proactive than Dad, especially when faced with adversity. He’d sit back, observe and eventually come to some conclusion he could live with, whereas she’d jump in and try to fix things with her bare hands, whether it was changing her own flat tires or replacing burnt-out bulbs in the exterior light fixtures atop her multi-story apartment house (she was acrophobic).

As soon as she saw it, my mother HAD to have this sculpture. She’d spied it in a furniture store on the Berlin Turnpike and put it on lay-away, driving however-many miles round trip from Hartford. She got paid every two weeks and allocated $1.50 every paycheck for this piece – I know because I made the trip to the furniture store with her more than once.

There was an undulating white fake fur lounge for sale there, too – but the lounge was “dream-stuff” – something to be desired but never actually purchased, since it cost 10 times what the sculpture cost, and wasn’t what she really wanted.

I think the sculpture only cost $20, but back in the late 1960s, that was a lot of money to my mother – hence the lay-away. I figure it took almost 6 months for her to get it. She never claimed to be a patient person, but this was special.

At the time, I didn’t understand the appeal of this piece; an old lady walking with a small boy, against a strong wind. It sure spoke to my mother, though – and she wasn’t one for tchochkes or keepsakes. She’d periodically purge her home of anything deemed unnecessary or frivolous. This sculpture was a rare exception. She told me she liked the set of the old woman’s jaw, the carefree gait of the little boy, the disparity in their ages, the intensity of the wind they’re up against.

A decade later, it burned up – along with a coffee table, a sofa she’d reupholstered (in white fake fur!) and the chair the sculpture’s occupying in this photo. The fire blackened the walls of her apartment and the smoke smell didn’t fade for many months afterward. Since I’m pretty sure the sculpture is one-of-a-kind, I’m glad I took this photo before the fire happened. 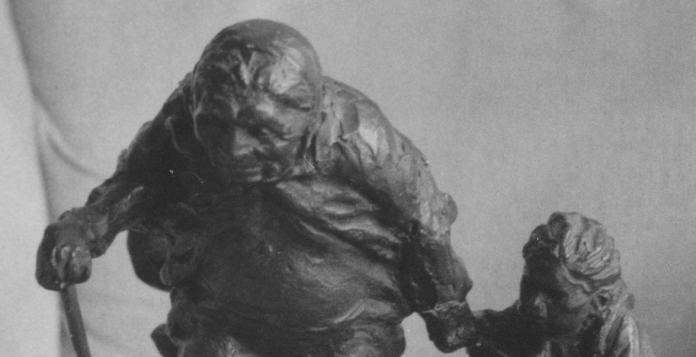